If you are using Apache Kafka, you are almost certainly dealing with many applications that need to work together to accomplish some big picture goal. In other words, you are working within a distributed system. And because Kafka decouples consumers and producers (meaning applications do not directly communicate with each other) it can be a challenge to illustrate exactly how data flows through your system. I plan to demonstrate how Jaeger is up to that challenge while navigating the pitfalls of an example project.

The source code for that example project is available on GitHub here: https://github.com/burkaa01/jaeger-tracing-kafka

What is Jaeger? What is OpenTracing?

Jaeger (https://www.jaegertracing.io) is an open source distributed tracer. It records and illustrates the life cycle of transactions as they propagate through a distributed system. Jaeger does the heavy lifting and ultimately paints the pretty picture, while OpenTracing (https://opentracing.io) provides the APIs I will use to interact with it.

Two vocabulary words to get straight when working with Jaeger and OpenTracing: span and trace. A span represents an individual unit of work done in a distributed system. In Jaeger a span has an operation name, start time, and duration. A trace is made up of and defined by one or more spans and in that way the trace is meant to represent the life cycle of an entire transaction. 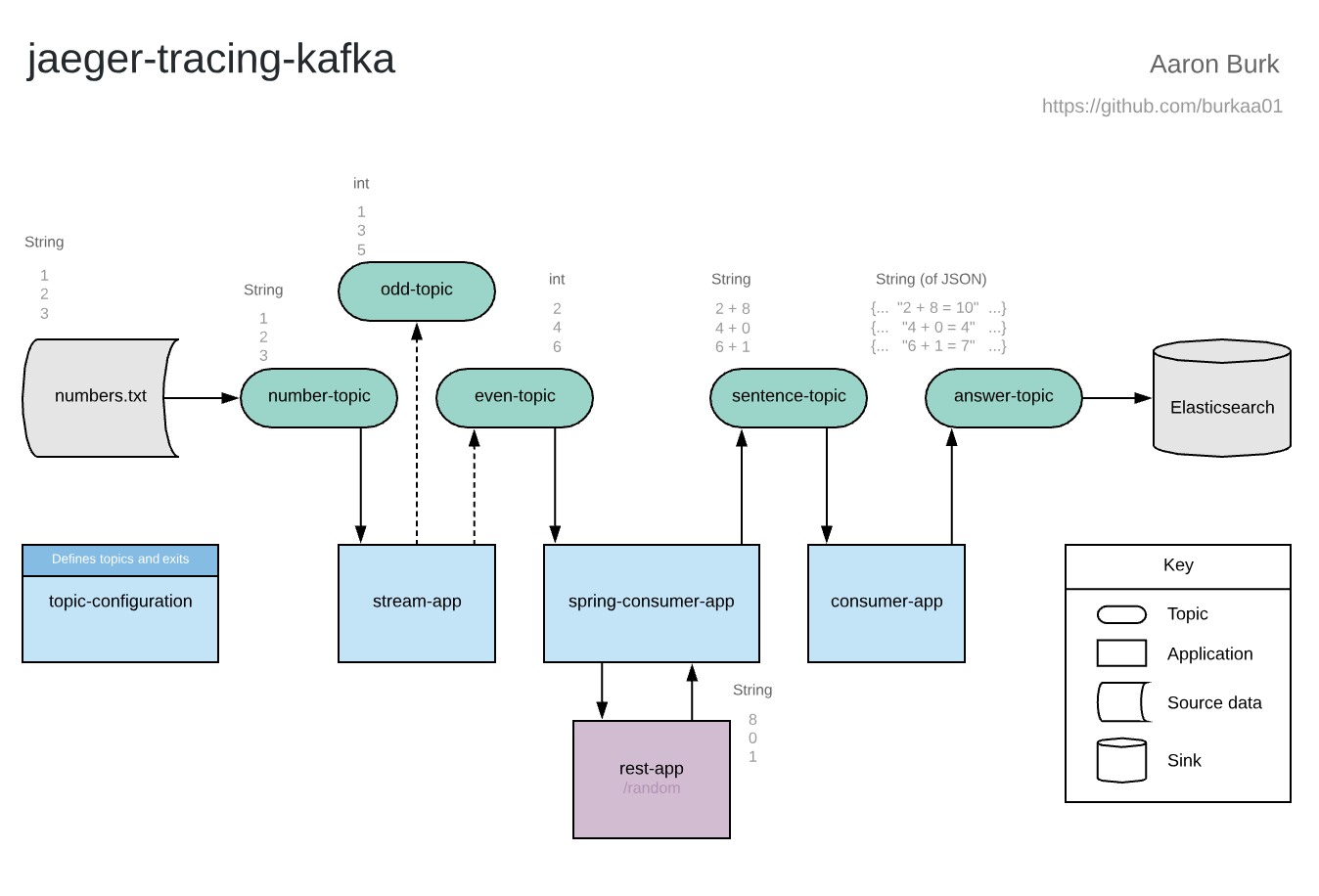 The example project diagrammed above, consists of five standalone Spring Boot applications. One of the applications (topic-configuration) simply configures all of our Kafka topics and exits upon completion, another (rest-app) defines an HTTP endpoint that will respond with a random number, and the other three (stream-app, spring-consumer-app, consumer-app) all consume and produce messages with Kafka. Ultimately what this project accomplishes is arbitrary. Given a text file of numbers, it will take each even number, add a random number to it, and produce sentence messages like: 6 + 1 = 7 where 6 is the initial input number from the text file. The important part, for the purposes of demonstrating distributed tracing with Kafka and Jaeger, is that the example project makes use of a Kafka Stream (in the stream-app), a Kafka Consumer/Producer (in the consumer-app), and a Spring Kafka Consumer/Producer (in the spring-consumer-app). In this way it is a perfect example to demonstrate how the tracing configuration differs in all three of these cases.

The example project also has two branches of code. The final result is in master, while what you have after initially configuring Jaeger tracing is in the init-tracing branch. That is to say, the init-tracing branch represents the state of the codebase after I make the changes outline in the “Configuring Jaeger tracing” sections below, but before I make the changes outlined in the “Finish tracing configuration” sections below, and I highly recommend comparing the two branches.

Reminder, the source code for this example project is available on GitHub here: https://github.com/burkaa01/jaeger-tracing-kafka

In order to get started configuring Jaeger tracing for each of the Spring Boot applications, you’ll need to include the appropriate dependencies. I used Jaeger’s jaeger-client along with a few of OpenTracing’s Kafka instrumentations (see each applications build.gradle for specifics).

For each application the next step is the same: to configure an OpenTracing Tracer and register it as the GlobalTracer. Take a look at the class com.github.burkaa01.stream.config.TracingConfig in the stream-app for an example of doing this and feel free to play with the sample type, the flush interval, the max queue size, etc. as you see fit. Here is a snippet:

The @PostConstruct above registers the Tracer as the GlobalTracer after initialization. This is important because many of the tracing interceptors make use of the GlobalTracer behind the scenes whenever an instance of a Tracer is not explicitly provided.

Because the stream-app makes use of Kafka Streams’ StreamBuilder, I am also providing the instance of the Tracer to the TracingKafkaClientSupplier when I set it as the StreamsBuilderFactoryBean’s KafkaClientSupplier.

In the spring-consumer-app, I needed to add the following class to the list of interceptor.classes when configuring the Spring Kafka ConsumerFactory properties in com.github.burkaa01.springconsumer.config.NumberConsumerConfig like so:

I did the same when configuring the Spring Kafka ProducerFactory properties:

And it looks like this on the producer side of things:

If you are following along on GitHub here: https://github.com/burkaa01/jaeger-tracing-kafka switch to the init-tracing branch and run this command from the base directory of the project to start everything up:

Wait a moment and then run the following commands:

Wait another moment and navigate to http://localhost:16686. You should see something like this:

The bad news is that the stream-app has at most 2 spans in a trace and each of our other apps in the “Services” list tell a disconnected story as well. Here is the picture for the spring-consumer-app for example:

Though each of our applications are able to communicate with Jaeger just fine, the spans are not connecting with each other in a single trace.

Correlation ids that are propagated through a distributed system for the purpose of tying a series of related events together is not a concept that is unique to Jaeger or OpenTracing. And whether or not you use Jaeger and OpenTracing, when applying that concept to Kafka, Kafka message headers are the perfect place to put this correlation information.

In this example project, thanks to the OpenTracing Kafka instrumentation I outlined in the “Configuring Jaeger tracing” sections above, the correlation information is already in the Kafka message headers. The problem right now is that my applications are not passing on this information properly as they consume and produce new messages.

Take for example, how messages are produced in the spring-consumer-app right now (see the init-tracing branch):

The ProducerRecord only knows the topic, the key (null), and the value. In order to continue the trace and associate the spans to the same trace, the message being produced needs the headers from the message the application consumed (with Jaeger an example of a header the next message needs to include would be “uber-trace-id”). Thus, that ProducerRecord initialization will have to change to this:

And similarly in the consumer-app the record produced in com.github.burkaa01.consumer.answer.AnswerProducer changes to this:

In the stream-app that uses Kafka Streams, when a message is produced with the following line of code, the KStream takes care of passing on any headers that were on the consumer record:

That is great news, but that’s not it. Take a closer look at the detail for the stream-app that came from the initial Jaeger tracing result:

The following method in com.github.burkaa01.stream.divider.DividerStream is my workaround for the first Kafka consumer in the project:

It builds and injects the first span manually.

Earlier in the “Example project” outline I mentioned that given a text file of numbers, only even numbers get a random number added to them. This is because I wanted to simulate an error with input data and demonstrate how to trace a message that interrupts the normal data flow and instead writes any bad input data to a dead letter queue. This dead letter technique is common practice when building data pipelines and for this example, any input number that is odd is considered bad data.

I already have a Kafka ProducerFactory configured in the stream-app, but the ProducerRecord initialized in com.github.burkaa01.stream.divider.DividerMapper has the same problem that the other Consumer/Producer applications had: the record needs the headers from the message the application consumed.

In order to get the ConsumerRecord headers in the context of a KStream, I have to retrieve the headers from the ProcessorContext, create a composite header value object, and pass that composite object as the value argument to the KStream map like this:

The transform gave me access to the ProcessorContext and allowed me to transform the String value into the composite ValueWithHeaders object. This is what tracingTransformerSupplier() looks like in com.github.burkaa01.stream.divider.DividerStream:

Now map in com.github.burkaa01.stream.divider.DividerMapper has both the value and the headers and will produce the following dead letter record when the input number is odd:

The spring-consumer-app makes an HTTP request to get the random number that it adds to the even input number. That rest-app is also configured to trace with Jaeger, but it isn’t enough just to do the following inside our RestController:

The HTTP response headers need to include the span context too:

On the spring-consumer-app side of things (the side that issues the HTTP request) there is an added challenge: OpenTracing’s io.opentracing.contrib.spring.web.client.TracingRestTemplateInterceptor does not address that this HTTP request span could actually be a child span of a Kafka message the application consumed.

So, instead of sending the request to the “/random” endpoint like this in com.github.burkaa01.springconsumer.sentence.SentenceProducer:

I needed to send the request to the “/random” endpoint like this:

Where the class com.github.burkaa01.springconsumer.config.TracingChildRestTemplateInterceptor in the code snippet above is my own custom implementation of the public interface ClientHttpRequestInterceptor and differs from OpenTracing’s io.opentracing.contrib.spring.web.client.TracingRestTemplateInterceptor because it supports headers that represent a parent span context and it makes sure the span that it builds is a child of that parent span:

Then when I get the HTTP headers back from the response I need to update the headers I will pass on to my producer to include any span context we gained calling the “/random” endpoint:

Now, if we start everything up again (as described how to do so in the “Initial Jaeger tracing result” section above) using the master branch of code this time (which represents the changes outlined in each of the “Finish tracing configuration” sections above) this is what the final Jaeger tracing result looks like:

I see eight spans for the stream-app trace where I used to see two, but I also still only see two spans when the stream-app simply consumed an input record and sent it to the dead letter queue because the number was odd, which is exactly what I expect!

Take a look at the trace detail view now: 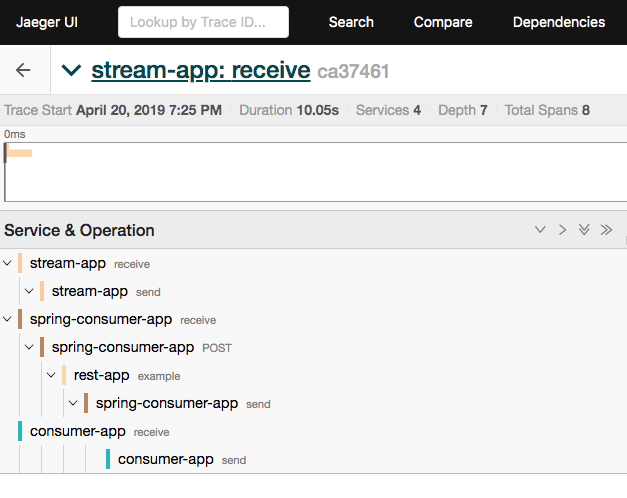 Jaeger is able to clearly illustrate that all of the following occurred:

Which, if you compare this to the initial example project diagram, lines up perfectly.

Outside of his full time role as a Principal Technologist, Aaron is a serial side project starter, the latest of which is a Spring Boot Java web app that manages contact info. With clients of Object Partners, Aaron is currently working with Apache Kafka, Apache Avro, Kafka Streams, Kafka Connect, Kafka Consumers/Producers, Spring Boot, and Java.

One thought on “Distributed Tracing with Apache Kafka and Jaeger”